Anandi Vara, 22, was trained in teaching English in Kathmandu, Nepal before teaching at a monastery in Pokhara. There she taught students ranging from six to 10 years of age, both in groups and on a one-to-one basis. Here she reveals the lessons she learned... 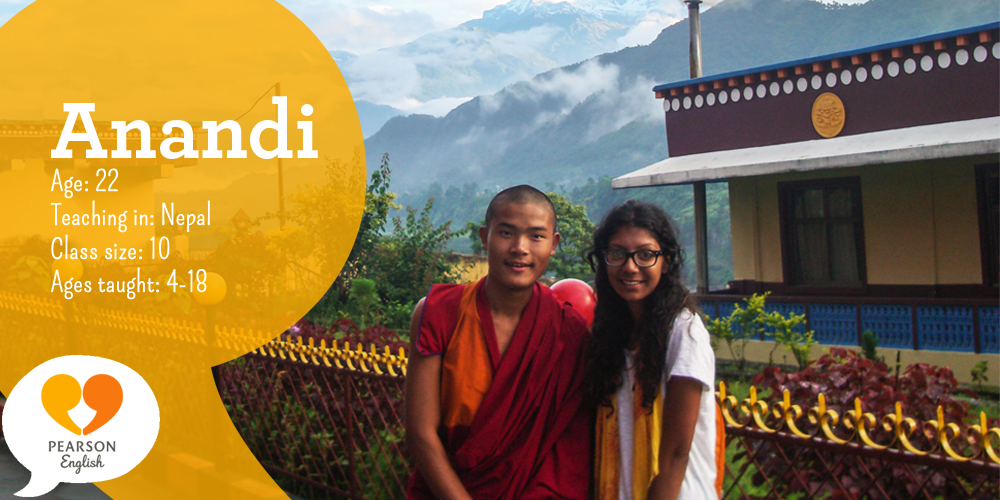 Anandi Vara, 22, was trained in teaching English in Kathmandu, Nepal before teaching at a monastery in Pokhara. There she taught students ranging from six to 10 years of age, both in groups and on a one-to-one basis. Here she reveals the lessons she learned during her time there – including how to avoid being perturbed by cockroach attack!

Whatever you do: don’t freak out!

It just makes everything worse. It’s easy for things to get overwhelming – a sense that can be made worse by the feeling of homesickness, especially if it’s your first time living abroad – but thinking rationally, and getting to the source of what’s causing the worry, usually helps. It’s important, as you don’t want to share your fear in lessons because you’re the teacher and have to hold it all together.

This was, however, tested to the limit when I had a cockroach dangled in front of my face. It took all my strength to stay calm. I gave an unimpressed look, thereby establishing myself as the figure of authority, which seemed to work!

Be aware of cultural traditions

It is important to remember that every country has its own traditions. I was teaching in a monastery, so I made sure to wear clothing that was respectful, even in the face of soaring temperatures. The more I learned about the Tibetan culture, the more fascinated by it I became. The students taught me how to write my name in Tibetan and the meaning behind it. I learned about Tibetan history and Tibetan culture. I also found that the more I showed willingness to learn about the Tibetan culture, the more that I bonded with the students so that when it was time to teach, the students were more co-operative in lessons, engaging and participated more.

There is so much I learned teaching abroad, both in the classroom and out. Making mistakes as you begin is only natural, but it’s whether you can learn from these mistakes that counts. No two students are ever the same so it’s a constant process of learning as you go. As a result, I learned about the environment I was in – from traditional prayer ceremonies to the Tibetan alphabet – and about myself, notably organisational skills and a renewed curiosity about the English language.

Sometimes it doesn’t matter if you’ve planned your lesson down to the T – if it doesn’t take, then it doesn’t take. I was only 10 minutes into a lesson once and I could tell that I was beginning to lose the students’ attention. Not only did it show that they were disinterested, it also distracted me from what I was doing. It was at this point that I threw out my existing plan and tried a whole new lesson: I had the students up on their feet and engaging with each other, and although completely improvised, it was very successful.

Patience is a must

During my one-on-one mentoring session, my student seemed to have no motivation. He wasn’t picking up the stuff as well as the other students and had therefore given up. No matter what I tried, he refused to co-operate, but I didn’t let it put me off. I kept trying different methods until finally finding one that he responded to. I made sentence structuring into a game. It wasn’t anything fancy, and consisted of scraps of paper with words written on them. Although it took a lot of time to find the right angle, it was worth it because he soon realised that although it might take longer for him to pick things up, he would eventually get there and have a greater sense of accomplishment.

10 modern English words and slang terms you should know
Previous

Assessment for learning with the Global Scale of English
Next