How English conversation works: a podcast with David Crystal

English language teachers everywhere spend time and energy helping students practice their conversation skills. In our recent Pearson English podcast, our panel asks whether conversation in English can actually be taught. And – if it can – what the rules might be.

To explore these questions, our panel spoke to world-renowned linguist David Crystal. He is an Honorary Professor of Linguistics at the University of Bangor and has written more than 120 books on the subject.

His latest book Let’s Talk: How English Conversation Works explores everything that makes up successful – and unsuccessful – conversations.

So, let’s see what David Crystal has to say:

What makes a good conversation?

“It’s very important that we put this everyday use of language under the microscope,” he says. In his book, he highlights three important facets of conservation that we should bring into focus:

But all in all, he says that people should walk away from a conversation feeling like they’ve had a good chat.

“For the most part, people want that kind of mutual respect, mutual opportunity, and have some sort of shared topic about which they feel comfortable – and these are the basics I think.”

Can the rules of conversation be taught in the classroom?

There are plenty of ways you can teach learners to engage in a successful conversation – including how to speak informally, use intonation, and provide feedback. So let’s take a look at some of the key areas to focus on:

Fluency and intelligibility are commonly covered in English language classes. But appropriateness can be more complicated to teach. When preparing to teach conversational appropriateness, we can look at it through two different lenses: subject matter and style:

“What subject matter is appropriate to use to get a conversation off the ground? There are cultural differences here,” he says. The weather is often a good icebreaker, as is the pandemic, since everyone has been affected by it.

The key is to find a common topic that all participants can understand and engage with.

Teachers can also teach students about conversational style, focusing on how to make conversations more relaxed in English.

There are “several areas of vocabulary and grammar – and pronunciation too, intonation for example – as well as body language, in which the informality of a conversation is expressed through quite traditional means,” says David.

One example he offers is teaching students how to use contracted verb forms.

This is what makes a conversation tick. When we have a talk with someone, we let them know we’re listening by giving them feedback. We say things like “really” or “huh” and use body language like facial expressions and gestures.

Of course, these feedback noises and expressions can be taught. But they won’t necessarily be new to students. English learners do the same type of thing when speaking their own language, anyway.

Keep in mind though, that when it comes to speaking online on video conferencing platforms, it’s difficult to give this type of simultaneous feedback. People’s microphones might be on mute or there might be a delay, which makes reacting in conversations awkward. So, says David, this means that online conversations become much more like a monologue.

Uptalk is when a person declares something in a sentence, but raises their intonation at the end. For English learners, it might sound like someone is asking a question.

Here’s the example he used in the podcast:

Now, should teachers teach uptalk? David says yes. For one, it’s fashionable to speak this way – and it can be confusing for English learners if they don’t understand why it’s being used in a conversation.

“The other thing is that we are dealing here with a genuine change in the language. One of the biggest problems for all language teachers is to keep up to date with language change. And language change can be very fast and is at the moment,” he says.

When it comes to accents, David is a fan. “It’s like being in a garden of flowers. Enjoy all the linguistic flowers,” he says “That’s the beauty of language, its diversity.”

About the Pearson English podcast 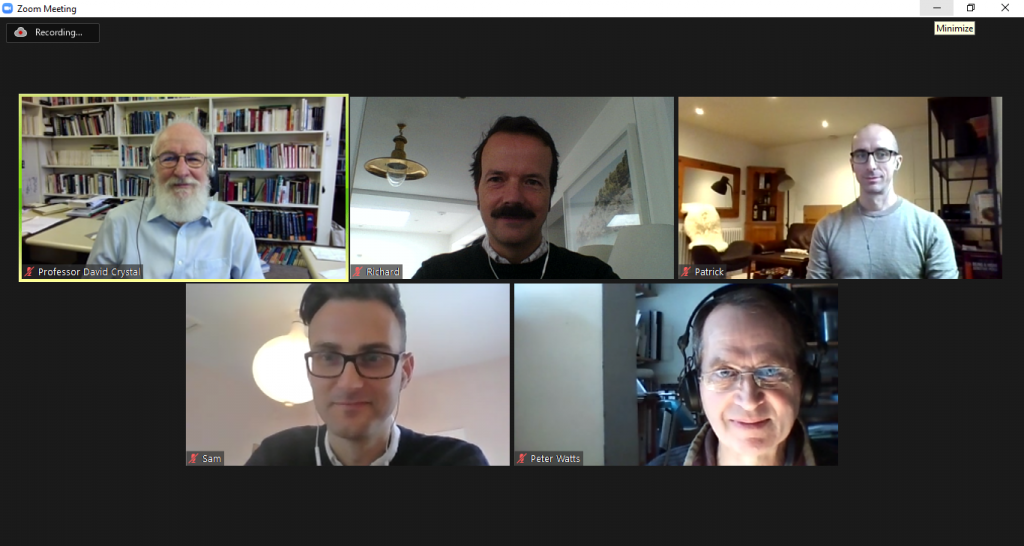 The Pearson English podcast invites English language experts from around the world to share their research and experiences, and discuss what’s new in ELT.

To hear our full conversation with David Crystal, listen to the episode now.

4 top tips to help you encourage teens to read
Next