Is game-based learning technology a waste of time? 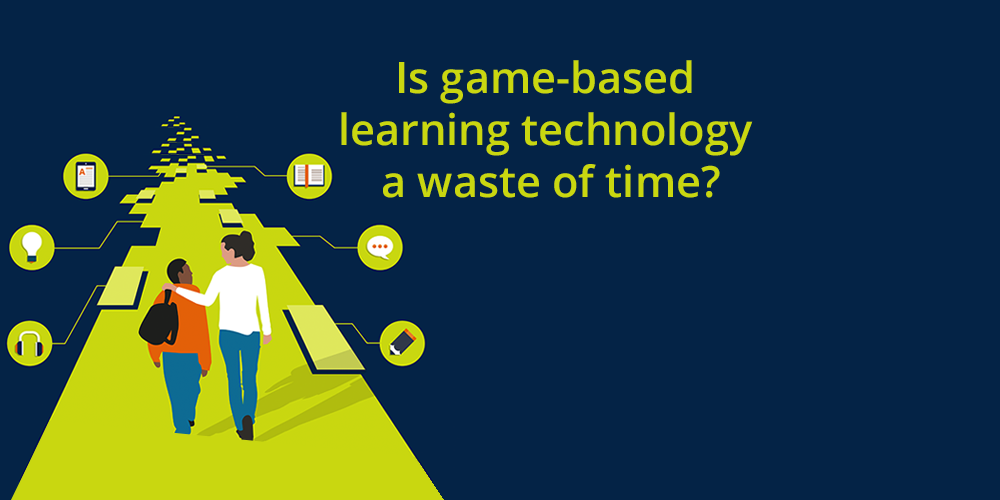 We feel that game-based learning (GBL) is a waste of time … if not properly understood. Even then, one could argue that ‘wasting time’ is a vital part of learning and perhaps we need to stop insisting that every second counts.

Let’s begin by first addressing the term ‘game-based learning’ and how it compares to its doppelgänger, gamification. Gamification is the application of game mechanics and dynamics to non-game contexts to solve problems, engage users and promote desired behaviours. For example, levelling up, points, awards or badges for achievement, the use of avatars, feedback, quests, collaboration… all those features that elevate games above the mundane activities of normal life.

The principles of gamification have been applied to the retail/services sector for years: think Frequent Flyers programs, Happy Hours in pubs, Weight Watchers points-counting, Foursquare’s badges for visiting new places. There are hundreds of examples of where game dynamics have been introduced into non-game contexts to influence behaviour and bring about a desired result.

Gamification does not refer to the straightforward use of games (whether digital or otherwise) as part of a teaching/learning interaction. A teacher using Monopoly in the classroom to demonstrate the idea of rent is not gamifying the learning environment; they are involving learners in game-based learning. GBL refers to the use of games as tools; as devices for opening discussion, presenting concepts, or promoting learner engagement within clearly defined learning objectives, in other words learning through playing games. Gamification is the appropriation of those principles, mechanics and dynamics that make games work in order to promote engagement or engender a desired outcome.

Teachers have introduced games into the learning environment since the dawn of time (Kim’s game, Pelmanism, Guess Who), and the uptake of GBL with digital games is particularly well demonstrated by the work being done by GlassLab, the Institute of Play, and the growing popularity of the likes of Minecraft and SimCity in schools. In terms of our immediate ELT context, pretty much any video game can be repurposed for language learning, in the same way a text, song or website can be. Take, for example, the smash indie game Limbo by Playdead. Although there is no actual spoken language in the game, the platform/puzzle format lends itself perfectly to practising language around predictions or conditionals (If I pull that lever, the door will open), recounting events (I was chased by a giant spider!), strategising, and so on. For the purposes of this post, we will be referring to existing digital games that have been appropriated into a learning context, as opposed to games that have been designed with a specific educational use in mind.

Sharma and Barrett’s definition of blended learning provides a useful context for approaching the use of digital games in such modalities, notably the combination of “a face-to-face classroom component with an appropriate use of technology.”* We’re making no assumptions about whether the games are being accessed in the classroom, on mobile or online at home. The blend isn’t defined by where a learner is, but by how their use of technology supports and enhances their contact with the teacher.

The notion of appropriateness in Sharma and Barrett’s definition is critical as, in the case of a GBL project, it assumes a teacher has a familiarity with both the tech and content accessibility of a selected game. Acquiring that level of familiarity with a game requires a certain amount of time engaging with it to determine its fit for the needs of the learners, an activity which might easily be considered off task when compared to the other demands being made on an educator’s schedule.

The benefits of GBL with digital games is potentially quite profound, however. First, studies indicate that playing video games in general can stimulate the generation of neurons and enhance connectivity between the regions of the brain responsible for memory formation, spatial orientation and strategic thinking. The right pairing of game and learning objectives could be argued to promote situated cognition, a theory that knowledge is constructed through – and inseparable from –  social interactions and the context in which they take place. A learner immersed in SimCity stands a much greater chance of understanding the principles of taxation and the provision of public services through playing the role of a mayor, for example, than a learner being walked through the annual budget. As Lim et al state: “ames are effective because learning takes place within a meaningful context where what must be learned is directly related to the environment in which learning and demonstration take place.”**

Early-stage research on mirror neurons is adding a new aspect to the discussion around the immediacy of playing games. In short, mirror neurons suggest that when we observe someone performing an action, there is the briefest of moments in which our brain cells fire as if we are carrying out that action ourselves. The boundary between observer (player) and observed (in-game character) becomes blurred for a split second. A lot can happen in that split second.

In addition to the benefits of an immersive, neuron-stroking experience, games demonstrably promote learner engagement by introducing the F-bomb into the mix (fun). They also have the capacity to provide an unrivalled social experience, as in the case of MMORPGs (massively multiplayer online role-playing games). As an example, consider how a leading MMORPG game, World of Warcraft, is already being applied in learning environments.

However, there are often deep-seated cultural aversions to the use of games in an educational context that GBL initiatives are required to overcome. It has been said that digital games are anti-social; that they rot your attention span; that they are not legitimate, validated learning resources. Although there is not yet a body of research that can empirically confirm or debunk the effectiveness of games used for learning, surely watching a learner plan, execute and evaluate a project in Minecraft with classmates suggests that those objections are based on dated assumptions. The language learning space in particular is still very much attached to a coursebook paradigm that is predicated on levels and a clearly defined syllabus. Perhaps GBL is too much at odds with an established business model that is the bedrock of too many large education organisations. The fact that the GBL market is predicted to grow to $2.3 billion by 2017 suggests that there might be a cause for concern.

So is GBL a waste of time? We’d argue that it is when its potential is not properly recognised and it is treated as light relief. Games are dynamic, engaging resources capable of delivering experiences and drawing connections that can really ignite a student’s learning experience. Furthermore, they bring a playful and unpredictable aspect to the learning process.

Share your innovation for a chance to win the Pearson ELT Teacher Award
We’ve just launched a new Pearson ELT Teacher Award! Aiming to recognise and celebrate teachers, the Award is open for any English teacher who has developed innovative ways of teaching in their classrooms. You may have used technology or digital tools in unique ways or re-invented traditional tasks. The Award encourages teachers to enter who can show that their ideas are not only unique but have improved learner engagement, motivation and success.

Tim has worked in ELT publishing and product development since 2008. He is a co-founder of ELTjam, a company that helps learning organisations build better products in better ways by putting the learner at the centre of every decision. Their unique Learner Experience Design (LXD) approach is driven by a focus on pedagogy, UX, learning content and interaction. Find out more at http://eltjam.com/welcome/.

You can’t teach an old dog new tricks. Or can you?
Previous

Blended learning: getting the right mix
Next