Try not to be tripped up by false friends 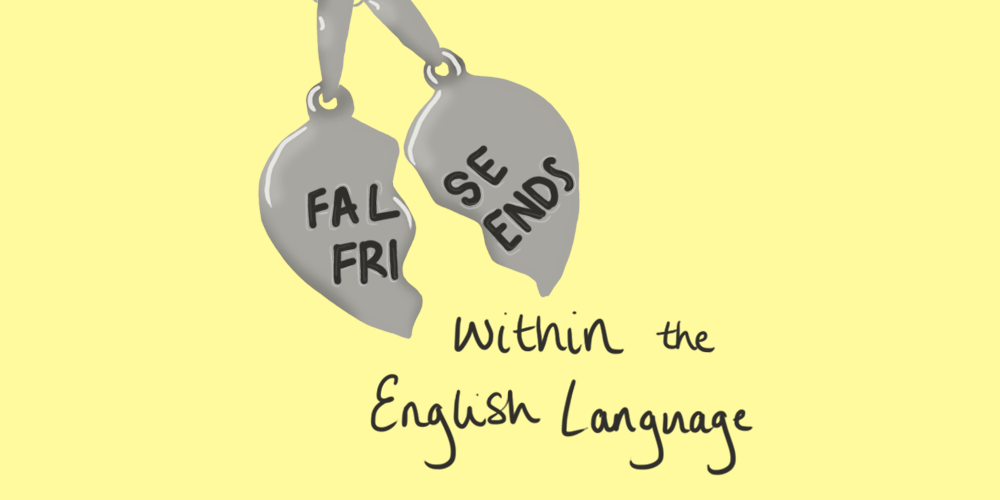 Learning a second language can be incredibly rewarding. It may feel like a bit of a challenge to begin with, but you’ll soon settle into the experience and begin to enjoy the benefits that learning English can bring.

When you’re learning a second language, it’s always good to be aware of its unusual aspects – particularly when your confidence soars and you begin using your new language to hold conversations. Here, we’ll introduce you to “false friends”…

In two different languages, you’ll sometimes find that there are words which sound similar. These can be helpful when you’re learning a second language, but they sometimes turn out to be “false friends” because they can mean something completely different.

Sometimes this occurs because language A may have “borrowed” a word from language B – or both have borrowed the word from another language or inherited it from a common origin. For example, both the English and Spanish languages draw from both Latin and Greek, and both have the word “actual”. In English, this is a synonym of “real”, but in Spanish it means “up to date”.

False friends are also created when the origin of the words are the same, but they have evolved into different meanings. For example, “gymnasium” meant both “a place of education” and “a place for exercise” in Latin. But its meaning has been restricted to the former in German and the latter in English – turning it into a false friend.

Sometimes, false friends can just cause a small mistake or alter the tone of your conversations. But be aware that they can also put you in embarrassing situations! Speaking of “embarrassing”, read on to discover how this word is included in our first example of a false friend…

Congratulations on your embarrassment!

Sometimes people mistake the Spanish word “embarazada” – meaning “pregnant” – with the English word “embarrassed” because they sound similar. In English, “embarrassed” means to feel awkward or ashamed, sometimes because something silly or inappropriate has happened.

Let’s have some time apart – I’m attending to you

In French, “attendre” means “to wait for” or “expect”, and “Je t’attends” is a phrase that boyfriends and girlfriends often text to each other when they’re spending time apart. They’re really saying “I’m waiting for you”, not “I’m attending to you”. In English, “to attend” to someone means to help or look after them.

I’d love to hear more about your romance

I can’t see anything without my lentils

In English, a “lentil” is an edible pulse. But it’s sometimes confused due to the similarity with the Spanish word “lentillas” – which means “contact lenses”.

Let’s get a drink at the balcony

The Portuguese word “balcão” is similar to “balcony” in English – a property’s outside area. But it also means the counter in a bar in Portuguese.

I left my notes in my carpet

Not usually a place for keeping notes…! The confusion arises because the English word “carpet” – a floor covering – is similar to the Spanish word for folder: “carpeta”.

Your bras are very toned

In French, “votre bras” means “your arm”, the limb between your shoulder and your wrist. It has no connection whatsoever with the female undergarment that “bra” refers to in English!

We’d love to hear if “false friends” have placed you in an embarrassing situation. Tell us in the comments section below:

Is it true that individual learning styles don’t matter?
Previous

How the English language has changed over the decades
Next