The rise in popularity of English internet slang 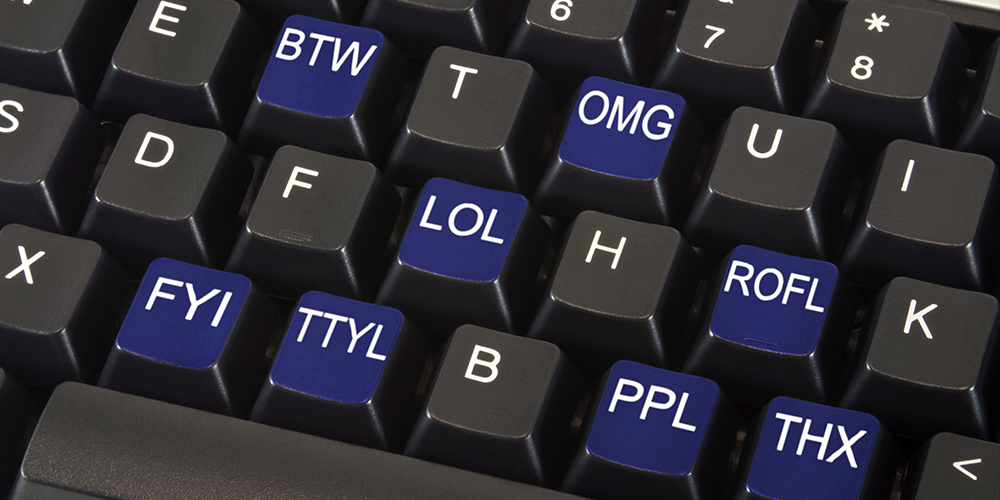 Do you ever “LOL”? Ask for something “ASAP”? Or perhaps you’ve given the advice “YOLO” to a friend? If you have, then you’ll know exactly what these terms mean. If you have no idea what we’re talking about, then let us explain. They are examples of English internet slang – abbreviations, phrases and acronyms that are used on websites and in chatrooms, forums and blogs. Of course, they’re not confined to the internet, and are also used in text messages (SMS) and as a linguistic shorthand in everyday life.

Internet slang like this is changing the way people use language – and not just in English. People use terms like these all over the globe. At first glance, you may think that internet slang words wouldn’t be able to help you learn a language. However, as the world embraces these terms, they can help you to become more immersed in English. Even the professional world is embracing these abbreviations, with the terms ASAP (as soon as possible), FYI (for your information) and IMO (in my opinion) making appearances in emails every day.

Laughing – in any country

A popular element of internet slang is LOL, meaning “laugh(ing) out loud” or “lots of laughs”. It’s become so widespread in internet and text language that it’s used more and more in face-to-face conversation, and is the inspiration for other laughter-related terms such as ROFL (rolling on the floor laughing) or LMAO (laughing my *ss off).

While LOL has long been an entry in the so-called urban dictionary, its common use also earned the term a place as an official acronym in the English dictionary in 2011. Such is its popularity that other languages have begun to incorporate the term into their own speech, and it is not uncommon now to hear people interject sentences in their own language with LOL – or other internet slang words. Its even morphed into a term of empathy or sarcasm in speech – you may reply “LOL, me too!” when a work colleague complains about hating Monday mornings.

Other languages have their own versions of a laughing abbreviation, perhaps inspired by the English language LOL. The French version “MDR” stands for “mort de rire”, which roughly translates as “died of laughter” – although LOL is popular in France, too. The Thai variation is “555”. In Thai, “five” is pronounced “ha”, three of them being “hahaha”. While in Brazil, “RS” is used as an abbreviation of “risos”, the plural of “laugh” and it can be written several times in a row to express harder laughter.

It’s difficult to compile an extensive list of internet slang because the language is constantly evolving and new terms are used every day. And just as classic terms such as LOL and OMG (oh my God) were questioned for their potential for dumbing down the English language, it still happens today. Let’s take the term “BAE” or “bae”. This is a fairly new term of endearment, the abbreviated form of “babe” or “baby”. Soon after it emerged on the internet, US pop stars Pharrell and Miley Cyrus turned it into a song called, “Come get it, bae.” This increased the popularity and usage of the term all over the globe. In fact, British magazine Esquire was so puzzled by the rise of “bae” that they published an entire article dedicated to it. Better not tell Miley that in Danish the word means “poop”…!

Another example of English internet slang that has started to infiltrate other languages and cultures is “TBT” – sometimes seen with a hashtag as #TBT. This stands for “Throwback Thursday”, a trend on social media sites such as Twitter, Facebook and Instagram where users post old photographs along with the hashtag. It’s become so popular that millions of publications, companies and individuals now use the term every day (it doesn’t even have to be a Thursday) – no matter what their native language is.

If you feel confident enough to start using English internet slang when writing and speaking the language, here are a few more terms that are trending right now:

Which English internet slang terms have you heard recently? Let us know by commenting below…

How to understand – and use – English oxymorons
Previous

The ultimate English homophone quiz
Next