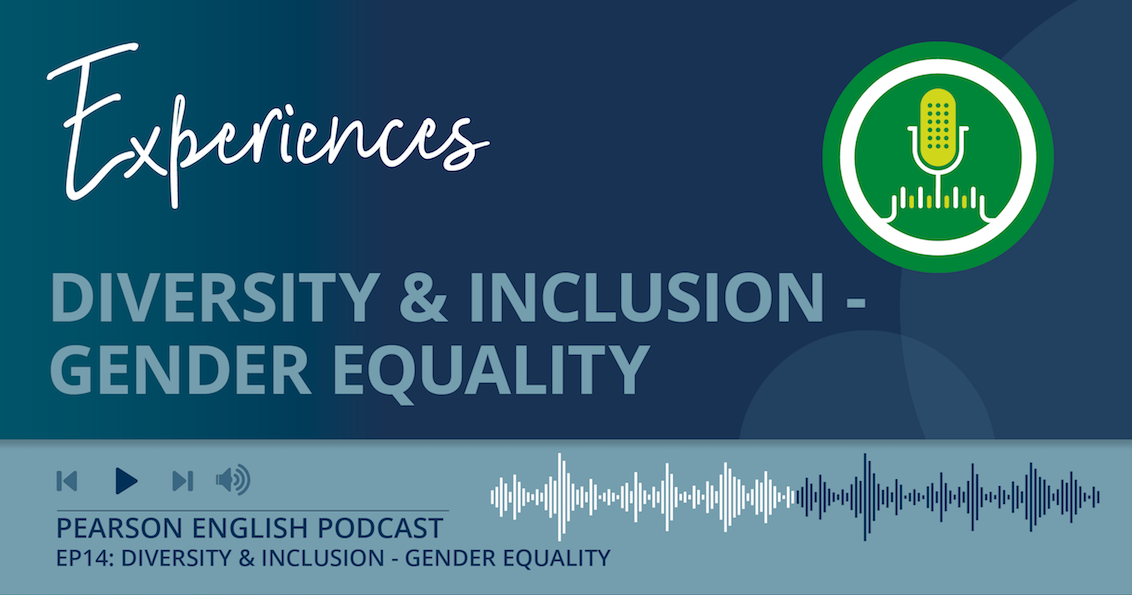 In this episode of the Pearson English Podcast, the panel speaks with Pearson’s Rushda Khan and Sarah Bacon. Together they helped to develop the Gender Equality Publishing Guidelines for Pearson.

Let’s explore their insights into gender inequality in the ELT publishing industry, look at why the guidelines were developed and what they involve.

Gender equality in the publishing industry

The impact of any learning material goes far beyond its subject matter and pedagogical objectives. Everything included, from the choice of language, to the imagery, to the text and front covers, has the potential to unintentionally reinforce stereotypes. This can shape a learner’s sense of self, of others around them, and can affect how they feel and behave in a social setting.

There is a wealth of evidence to suggest that early gender bias influences future inequality. It can affect career aspirations, influence the choice of school subjects and ultimately contribute to gender disparity as children grow into adults.

Rushda and Sarah recognize that this is a challenge for all sectors and industries across society. They have developed the Gender Equality Publishing Guidelines for Pearson with the aim of ensuring that our materials are gender equal and showcase positive female role models.

The guidelines help to ensure that women are represented equally to men in our learning and teaching materials. This includes making sure that the representation of women is not reinforcing negative stereotypes. For example, content that shows women as single parents, can also present them as single parents and workers. The idea is to show students that women can do both.

Another common example is with regards to science materials. Often, when students are asked to describe a famous scientist, they describe a character similar to Albert Einstein with white hair and a white coat. Female scientists are often overlooked in this respect. Historically, they have not been given as much attention as their male counterparts.

This type of unconscious bias is something the guidelines aim to help change. Our goal is to represent both women and men from a variety of backgrounds across all subjects. For example, some content shows women working in traditionally male roles, such as pilots, engineers and soldiers. The objective is to highlight that women can do these roles equally.

Another issue is the objectification of women. Often, women are presented as not having agency or purpose and too much focus is placed on their appearance, rather than their intentions, behavior and aspirations. The new guidelines set out to change this.

2. The use of language

Our language is gendered, and therefore steeped in stereotyping.

We aim to promote the use of terminology that is non-gendered. For example, using ‘police officer’, ‘firefighter’ and ‘maintenance worker’ instead of ‘policeman’, ‘fireman’ and ‘handyman’. Although this is a small change, it contributes to removing the unconscious bias surrounding jobs and professions.

Adjectives can also play a role in perpetuating gender inequality. We often associate particular adjectives with genders. For example, words like ‘hysterical’, ‘shrill’ or ‘frumpy’ are typically used for women. Whereas men can be described as ‘assertive’, women are more likely to be seen as ‘bossy’.

Furthermore, parallel language is something that needs to be looked at. Words like ‘girls and boys’ can be replaced with ‘students’. In this way, the guidelines are here to make sure that there is no gendering within materials. This will influence gender equality among our users.

Another key issue involved in the material is the referencing of third-party content. For example, often stories based on classic fairy tales are used to represent certain points. These typically show the strong male hero saving the weak female damsel in distress.

Although these are stories that our society has grown up with, they are particularly unhelpful with regards to offering a gender balanced view of society. Pearson’s guidelines are in place to ensure that students see women and men as equals throughout the materials.

What can teachers do to help in the classroom?

In order to help fight against gender inequality, teachers can think about incorporating more female stories and role models into their lessons. For example, rather than simply focusing on Issac Newton or Albert Einstein in science class, they can introduce famous and influential women in the field.

At a management level, schools can be more aware of what materials they are choosing to bring in, assessing whether the content is balanced, before accepting it. These simple actions can help our learners grow up with a more balanced view of gender.

To find out more about Person’s Gender Equality Guidelines, listen to the full podcast episode.

Build Success Beyond the Classroom: How to Teach Critical Thinking
Previous