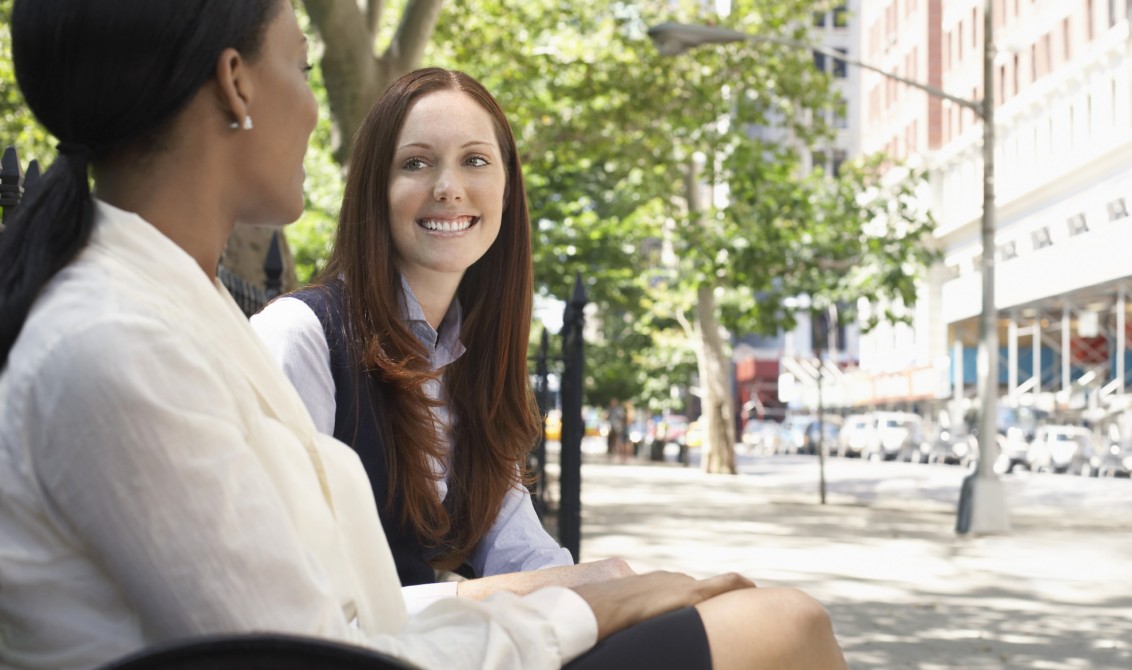 As humans, we learn and grow through our interactions with other people. Often these encounters are centered around great conversations – rich, meaningful exchanges among a small group of people where each person both actively listens and shares. Great conversations are invaluable – they enrich our understanding of people and the world around us. Socially, being someone who can engage effortlessly with others allows us to create deep friendships and gain incredible personal growth and satisfaction. In our careers, we are more effective when we work well with others – the ability to collaborate and solve problems together makes us more effective professionals and makes our businesses more successful.

But what if you must hold a conversation in English and it is not your native language? One of the many obstacles to learning something new, like English conversation, is that it can be a difficult, time consuming and even a little scary! That’s why we put together a list of nine English conversation mistakes to avoid that apply whether you are speaking with one or several people at once. Keep these tips in mind to help you improve your interactions with people all over the world…

Faking interest in the person

One of things that separates a conversation from a “transaction” (such as ordering something in a restaurant) is the genuine mutual interest of each person in the other. If one doesn’t really have an interest in knowing more about the other person, neither will engage meaningfully, and the interaction will become transactional or just “small talk.” Most people are fascinating – take the time to learn what you can about them.

People are more engaged and willing to share when they are relaxed and happy. Especially when you don’t know someone well, it is always better to focus on the positives – avoid both sharing your biggest troubles and bringing up topics that could be negative from a cultural, religious, political, or even personal perspective. There is always something positive to share!

Trying to “win” an argument

Particularly when speaking with someone you don’t know well and/or someone from other country or background, it is precarious for a conversation (especially one where you are practicing your English conversation skills) to evolve into a debate or argument. It is likely that for any two people, there will be many points of disagreement, and if such differences emerge, it’s better to just attempt to understand the other person’s point of view rather than to “win” an argument. It is perfectly acceptable to agree to disagree about certain issues and move on.

If you want to have a great conversation, others must feel you aren’t judgmental. When someone feels their ideas and beliefs are questioned or belittled, any meaningful exchange will often shut down. Instead, try listening for understanding, and it’s possible you may learn something!

It is said that great actors make their fellow performers look great. It is the very essence of teamwork, and the same principle applies to great conversationalists. Ask questions that allow others to be positive, confident, and maybe even a little boastful, but certainly remember to do it in a genuine way. The positive energy will be contagious!

There are over seven billion people in the world, and none are exactly like you! In fact, the greatest learning experiences are often from interactions with those who are very different from ourselves. Embrace and celebrate those differences. Allow others to share their unique perspective and journey, all the time keeping in mind we all share so much in common. We all want to be happy, love others, and have meaning in our lives.

Trying to be someone you are not

There’s only one person you can be, so don’t try to be someone else or something you are not. A great conversation is based on authenticity, and most people can easily sense when another is not being truthful or authentic. While keeping in mind all of the other rules, it’s both acceptable and expected for you to share your own journey!

We’ve all been in those conversations where the other person just dominates by talking incessantly. At some point we shut down, just waiting for it to be over. Active listening and learning ceases. Engagement requires participation from both parties – don’t hold back from sharing, but at the same time don’t be that person who dominates and effectively shuts down that engagement.

What separates a great conversation from “small talk” is the meaningful nature of the dialog. Talking about the weather doesn’t elicit much other than maybe politeness. A great conversationalist elicits meaningful thoughts from others, and those come from purposeful questions. People love to think; asking them something that requires thoughtfulness both deepens the value of the conversation and strengthens the relationship between the parties.

ESL and EFL – Are they the same?
Previous