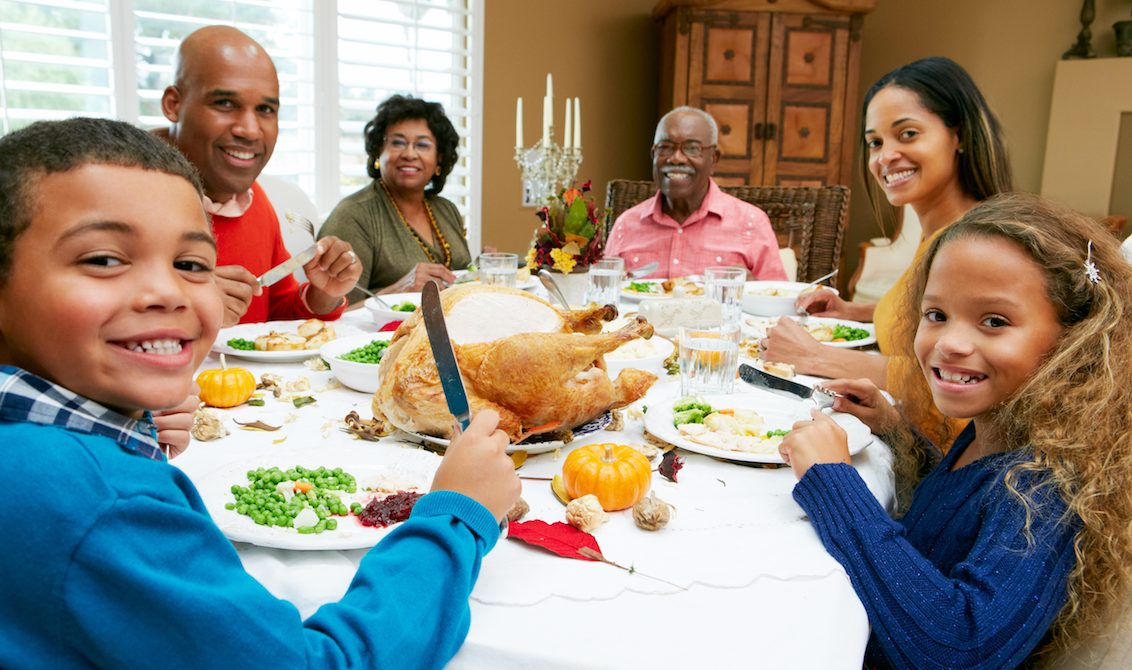 Thanksgiving is celebrated in the USA on the fourth Thursday of November – and there’s more to this national holiday than just turkey, stuffing and pumpkin pie! It’s a time to be surrounded by friends and family and be thankful for everything we have.

In the run up to the holiday, it’s the perfect excuse to get crafty with your students or take a closer look at North American culture.

To help, here are 5 activities for different levels to get them in the Thanksgiving mood this 28th November.

What you’ll need: a pen and paper.

This is a really fun and simple warmer that you can use to introduce any festival or holiday. Write the word THANKSGIVING on the board and tell the students they have to make as many words as possible using only these letters.

Show them the obvious, such as the word ‘thanks’, but also demonstrate they can rearrange the letters to make new words like ‘sing’. Set a time limit of three minutes. At the end, award points for the team with the most words. Offer bonus points for the words with the most letters. 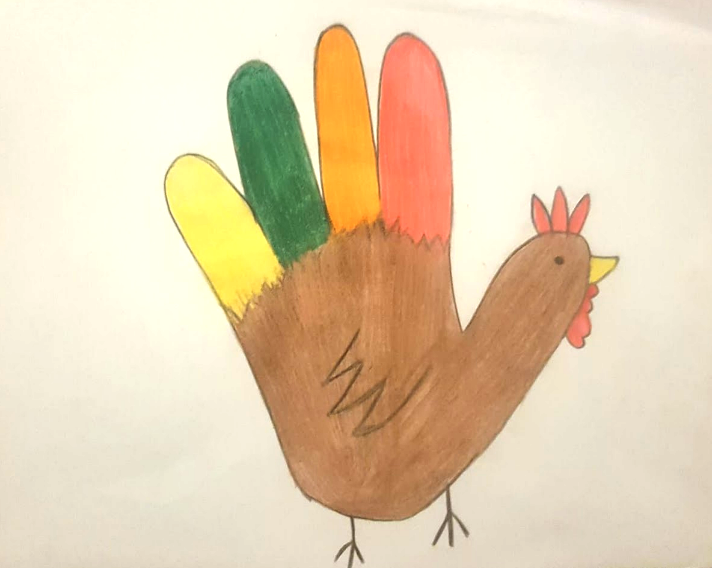 Did you know that 46 million of them are eaten in the USA for the holiday? It’s thought that it has become the festive food of choice because the Pilgrim’s ate wildfowl around the time of the first Thanksgiving feast.

So with so much of the season centered around turkey, why not incorporate them into your class?

On the board draw a turkey by using your hand as a template. Draw around your hand and using the thumb as the head and the fingers as the tail feathers. Then draw eyes, beak and the wattle on the thumb, adding the feet at the base of the hand. Ask the students what it is and they should be able to recognize it is, in fact, a turkey!

Get students to carefully do the same – drawing around their own hands and adding the other features. They then color the base of the hand and thumb in brown and the tail feathers in different colors – preferably autumnal ones.

You could even include faux feathers and googly eyes as well, and voila! You have a beautiful Thanksgiving bird.

For the older kids get them to label all parts of the turkey or include a Thanksgiving rhyme like this one:

Thanksgiving is a time to appreciate what you have. Before enjoying their glorious meal American families will often go around the table expressing something they are thankful for from the past year – with typical thanks going to good health, family and friends.

This lovely tradition is the perfect opportunity to create a positive atmosphere in class and get your students thinking about different ways to express gratitude in English.

Before the class ask students to each bring in a clean, empty jar from home. This will be their gratitude jar. Begin by sharing what you’re thankful for and brainstorm some ways for expressing this:

Next, ask the students to write what they are most thankful for on separate slips of paper, and put them in the jar. Give them some ideas to get started:

You can use the jars in a number of ways. For example, make a speaking activity where each person has to explain why they are thankful for each thing. Or play a game where everyone has to guess which jar belongs to who. Either way, it’s something nice for students to take home, look back at and reflect on in the coming months. 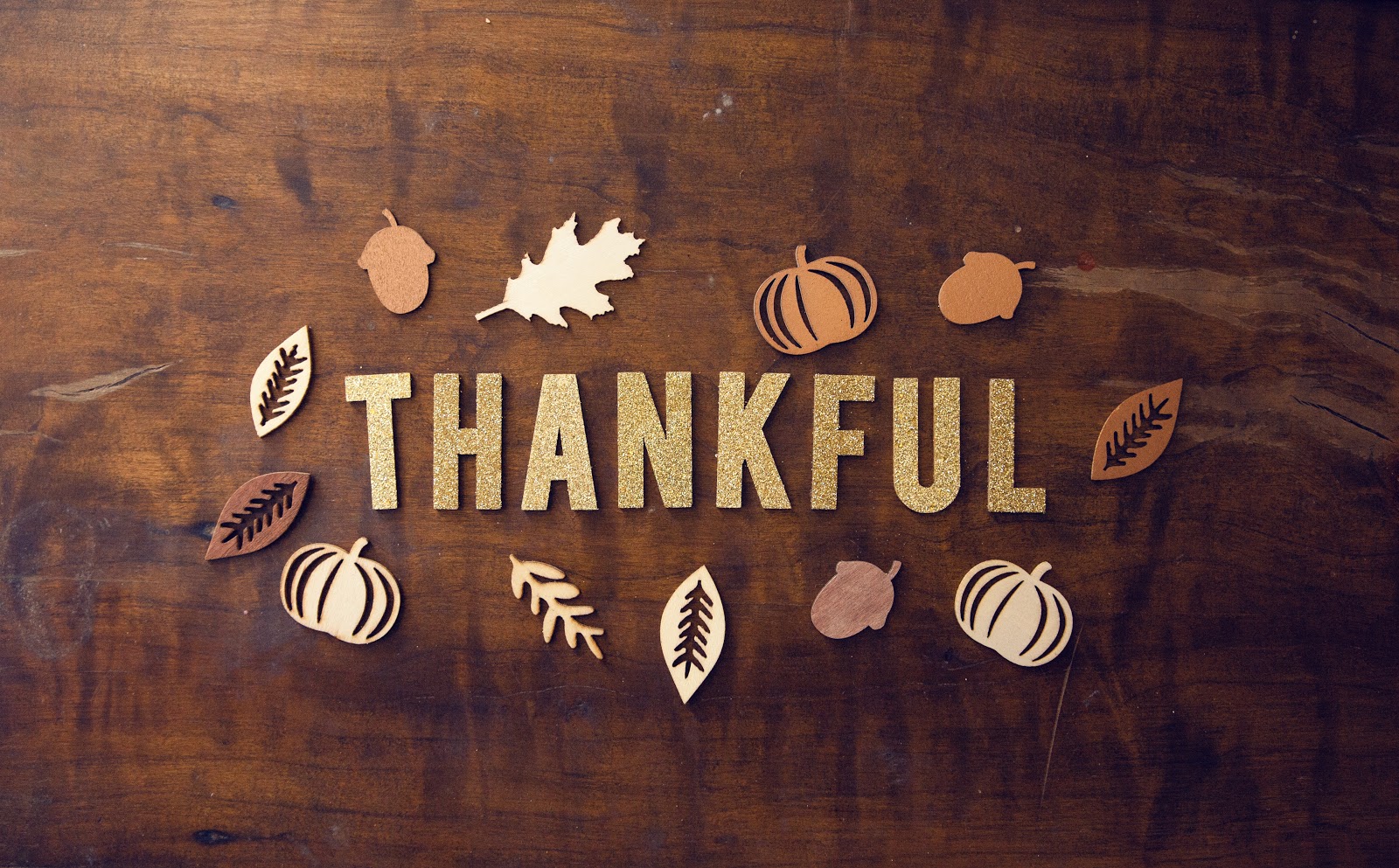 A really exciting part of Thanksgiving for many Americans is the annual Macy’s Thanksgiving parade in New York City. Each year the three-hour parade is broadcast to millions of viewers on television and features interesting sights such as floats, brass bands. Many years ago they even had live animals borrowed from Central Park Zoo!

The Macy’s Parade is definitely a weird and wonderful spectacle and makes for a really fun classroom activity.

Begin by showing your students footage of the Macy’s parade like this clip from YouTube (you can just show part of the video):

Afterwards, tell your students you’re going to create your own Macy’s Thanksgiving Parade and it’s up to them to create the costumes using different materials. Encourage them to get creative and think of their favorite characters from cartoons, storybooks and superhero films.

Set a time limit for learners to create their parade costume in groups. One student should be the model.

Have them make masks, headwear, capes – anything that will help them stand out from the crowd.

Once the timer is up, give students ten minutes extra to write a description of their costume. Circulate, making sure to help with any difficult vocabulary and teach the difference between present simple and present continuous constructions:

He is a ninja turtle

He is wearing a shell, a belt and a mask

Now it’s time to host the parade! Have the kids march around the classroom whilst the rest of the group describes their creation. Team it with some brass band or upbeat music in the background and take a vote for the best outfit.

Your teenagers and adults needn’t feel left out this Thanksgiving. Why not capture their imaginations with the story of the origins? Even better, turn it into a gap-fill or a dictogloss like the one below:

What you’ll need: A printed text about Thanksgiving, pens and paper.

Thanksgiving is a national holiday celebrated in the United States, celebrated on the fourth Thursday in November. In September 1620 a ship called the Mayflower left Plymouth in England carrying 102 passengers. After a long and difficult journey, these Pilgrims settled in Massachusetts and made an alliance with the local Wampanoag tribe. The tribe helped the pilgrims learn to fish and cultivate food such as corn. Thanksgiving is supposedly modelled on the survival of the first winter and the first harvest in America for which the two nations shared. A feast is normally held in remembrance of this first Thanksgiving.

Pre-teach some of the vocabulary like ‘ship’, ‘passengers’ and ‘cultivate’. Then, read the paragraph aloud while students listen and note down keywords.

Next, ask them to reconstruct the story in groups using their notes. Finally, share ideas as a whole class and show the original text for comparison. Draw students’ attention to any difficult vocabulary or ask them to pick out examples of active and passive constructions.

You can then dive further into the history of Thanksgiving, or use it as a stepping stone for a conversation about other unique traditions.

For more ideas check out our Thanksgiving-themed lesson plan.

Do you have any other Thanksgiving activity ideas planned for your classes? Let us know in the comments.

Richelle Zakrzewski is the Campaign Manager for global campaigns with Pearson English. She has worked with Pearson for nearly eight years in both the U.S. and the UK and has experience across higher education sales, marketing, and product development. Before joining Pearson, she worked in the U.S. Senate on a diverse range of issues which included the Department of Education. In her spare time, she is an active volunteer with educational charities that have partnered with Pearson's Project Literacy initiative.

A2 Key and B1 Preliminary: a guide to Cambridge English Qualification changes in 2020
Next