4 Coding Mindset activities you can do with Young Learners 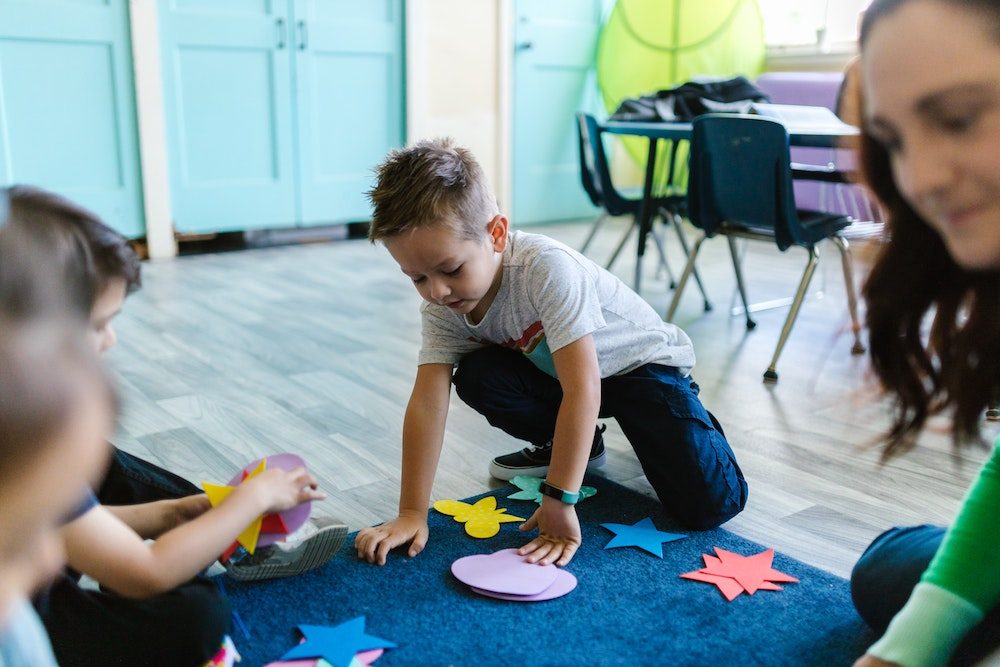 Young learners are preparing for a future of work that we can’t even imagine today. Technology, climate change and an unpredictable work environment means they will have to be adaptable, creative, critical thinkers. Most importantly, they will need to have the ability to solve problems and work well with others.

As teachers, it’s down to us to help them develop these 21st century skills at an early age. And being such a technology-driven society, there is an onus on developing STEAM (Science, Technology, Engineering, Art and Math) competencies. This is where a coding mindset comes into play.

Students with a coding mindset approach problem-solving like developers. Not only are they perseverant, organized and resilient, they:

If you are keen to help your young learner students to develop a coding mindset, but aren’t sure where to start, these  four activities will guide you.

All of the activities are easy to prepare and can be adapted to different ages, levels and classrooms.

Activity 1: What is the correct order?

What coding concept does it work on? Algorithms

What does that mean? Algorithms are a set of instructions in a certain order.

How does this help language learners? Ordering sentences can help students with their understanding of verb tenses, signposting language and text structure, among others.

Write out a simple recipe on a sheet of paper. Make sure to separate the stages, such as the example below:

Next cut out the instructions and mix them up.

Ask students to put the instructions in the correct order. They can do this individually or in pairs or groups.

Finally, ask the students to share their answers and compare them to the original recipe.

As an extension, to further develop problem-solving skills and critical thinking, ask students what would happen if they mixed up the steps. For example, if they put the eggs in the bowl before cracking them. How could they resolve this?

In this activity, students learn to look at the big picture and break it down into small parts. They also practice thinking logically – and have to review and reflect on their work at the end.

This sequencing activity can easily be adapted by using pictures to put the events of a story in the correct order. Alternatively, it can integrate social science teaching, for example,  putting in order actions such as crossing the road or brushing your teeth.

You can find similar activities working on algorithms/sequencing in English Code, such as this example from Level 4: 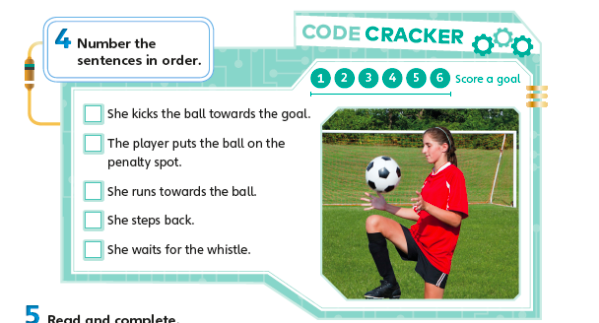 Activity 2: What comes next?

What coding concept does it work on? Patterns

What does that mean? Computer programmers use a pattern to solve a known problem, so they don’t need to write a new piece of code every time the same problem comes up.

How does this help language learners? Noticing patterns can assist phonetic awareness, understanding of spelling rules and sentence structure.

Materials needed: copies of flashcards or printed pictures from the internet or realia or strips of paper or a board and colored markers

This example uses a board and board markers and reviews vocabulary for colors.

Draw colored circles on the board, for example: red – yellow – blue – green – red. After the final circle, leave a space.

Ask students what color the next circle should be. They should identify that it should be yellow, because this is the next color in the pattern.

This activity can easily be adapted using, for example:

This kind of activity can be found in English Code. The example below is from Level 4. Learners have to notice the pattern between the numbers to complete the sequence. 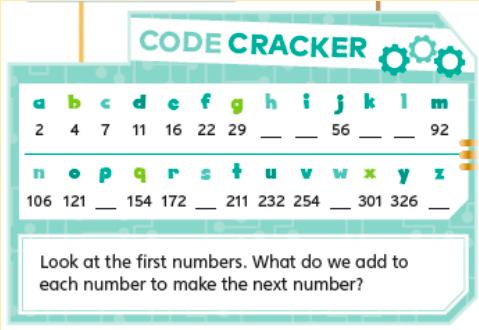 Activity 3: Listen and do

What coding concept does it work on? Decomposition, abstract thinking and algorithms

What does that mean? Decomposition means breaking down a large problem into smaller, more manageable parts. Abstract thinking means focusing on the main task and ignoring unimportant details.

How does this help language learners? Breaking down a large task into smaller parts prevents students from getting overwhelmed and can mean they are more likely to complete the task successfully.

Clear a large space in the classroom.

Put students into pairs. Ask students to assign roles: the computer and the programmer.

The “computer” must give instructions to the “programmer” to get to the other side of the classroom. The programmer can only move when the computer gives instructions.

Remind the student playing the programmer to give clear instructions and think carefully about the order.

Once the student playing the computer gets to the other side of the classroom, students can swap roles and do the activity again.

At the end of the activity, ask students questions to reflect on the activity, for example – did anything go wrong in the activity? For example, did the programmer move in a different direction? What problem did that cause? How did you resolve it?

What coding concept does it work on? Conditions

What does that mean? A condition is an exception to a rule. It tells a computer what to do if a certain condition is fulfilled, for example an ice cream machine that releases ice cream via a lever could be programmed so that if the ‘strawberry’ button is pressed, strawberry ice cream comes out of the tube.

How does this help language learners? The real world changes according to conditions. For example, our plans for the weekend might change according to if it rains or if it’s sunny. Activities based on the coding concept of conditions build flexibility and resilience. It can also help students understand grammar and spelling rules.

After playing a few rounds of the game, ask students what the rules of the game are. They should say that they can only move if you say ‘Simon says’ (or the name you chose).

As a follow-up you can ask students to do one of the following:

If teacher says “Simon says” → do the action

A version of this game features in English Code Level 1 –  “Teddy says”: 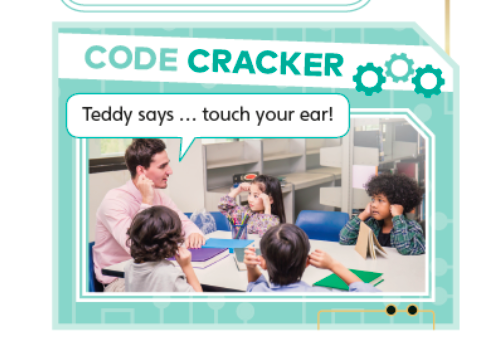 With a syllabus that incorporates STEAM learning, children develop a coding mindset, learn how to solve problems and work on their collaborative skills. Core functional language is at the forefront, giving students the vocabulary and tools they need to become confident speakers of English inside and outside the classroom.

Learn more about English Code or download a sample now!

Rhiannon Ball is a materials writer and editor. As an author, she has written many ELT coursebooks, especially for young learners.  She is interested in integrating transferable skills and CLIL in language teaching. She advocates diversity in courses and is ELTON-nominated for materials created for non-governmental organisations in Brazil, which she has recently transformed into a YouTube channel.